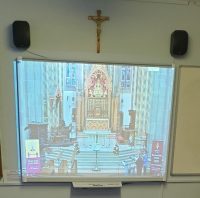 The children watched the live stream in their classrooms

On Monday 29th June all of the children in school, joined children from many other Catholic schools in the Archdiocese of Birmingham by joining in with a very special Mass which was live streamed from St Chad’s Cathedral in Birmingham and was celebrated by His Grace,  Archbishop Bernard Longley.

The Good Shepherd Mass celebrated the work done by the charity Father Hudson’s care and also the feast of SS. Peter and Paul.    Each Lent we raise money for Father Hudson’s Care at school.

The children watched the live stream in their ‘classroom bubbles’ and joined in with the hymns,  which they had practiced in preparation.

Well done to everyone who took part.

This entry was posted on Monday, June 29th, 2020 at 12:00 pm and is filed under Catholic Life, Masses. You can follow any responses to this entry through the RSS 2.0 feed. You can leave a response, or trackback from your own site.